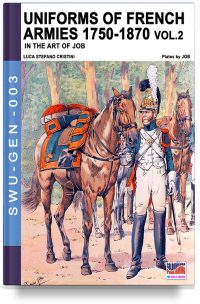 by Cristini, Luca; illustrations by JOB

This book presents the development and complexity of France's uniforms, from the Louis XV era just to Second Empire of Napoleon III. All the subjects are seen through the eyes of Jacques Marie Gaston Onfroy de Breville, well known by the pen name Job after his initials (1858-1931), a great French artist.

The series is published in three volumes that includes about 200 and more wonderful original illustrations of uniforms from the 18th century to Napoleonic era and just to 1870 about.

This book presents pictorial documentation of the appearance of French soldiers throughout the period with the support of short essays on France's military history. The particularly well-executed original Job's illustrations, slightly restored by our graphic artist are presented to the general public here for the first time. Job's plates shows how the Royal and (after) Imperial French Army, time and again, was a decisive factor in the story of Europe.