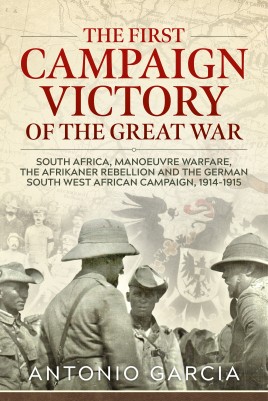 Compares the campaign in German South West Africa to maneuver warfare theory. Maneuver theory is based on the principles of mobility, rapidity and surprise which attempts to achieve victory with the least loss of resources and in the shortest time possible. In order to achieve a rapid victory against the German forces, the South African soldiers were pushed to the limits of exhaustion to achieve the Union of South Africa's strategic objectives.

The campaign in the deserts of German South Africa became the setting for adventure and war, where Briton, Boer, and People of Colour served together as a Dominion of the British Empire. Blacks, Coloureds and Indians fought for the hopes of better political franchise, an ambition which was not to be achieved until 80 years later. The book addresses the complex political dynamics in South Africa at the time of the Great War, the deep division between Afrikaners and British South Africans and the Afrikaner Rebellion.

With the backdrop of political difficulties and a lack of overwhelming support for the entry into the Great War, the Botha government needed a quick result so as to maintain the delicate balance of power. The author provides an analysis on the campaign through the lens of military theory so as to determine how the swift victory was achieved. The book answers the question of whether the campaign was won through numerical superiority or through the use of a superior operational strategy. The victory was the first campaign victory led by a British Dominion.