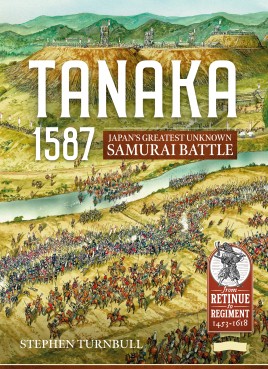 In 1587 the 1,000-strong garrison of tiny Tanaka Castle in Higo Province (modern Kumamoto Prefecture) on Japan's southern island of Kyushu, held out for 100 days against an army ten times their size sent by the great general Toyotomi Hideyoshi. When the castle fell, it was burned to the ground, and for four centuries the epic struggle lived on only through a handful of letters, two little-known war chronicles, and in the folk memories of the local people.

Tanaka 1587 uses evidence that is available from history, literature, folklore, archaeology, and cartography based on the author's own translations of the chronicles and the archaeological report together with his extensive fieldwork.

In 1986 everything changed. Prompted by the approaching fourth centenary of the battle, the local council set in motion a systematic archaeological investigation of the castle site. Many interesting finds were made, but the greatest discovery of all came in 1989 in a distant library when a researcher unearthed what turned out to be Japan's oldest surviving battle map. It featured a detailed drawing of Tanaka Castle during the siege that matched up exactly with the picture that was emerging from the excavation. The unique document also contained so much extra information that, when combined with the archaeological finds, the written materials and local folklore, the almost forgotten siege of Tanaka became one of the best documented battles in the whole of Japan's samurai history. Includes 55 b/w photos/ills, 3 b/w maps, and 8 color plates.