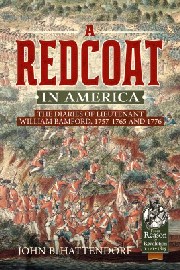 This volume consists of two diaries by William Bamford, an Irish officer in the British Army in the mid-18th century. Includes 22 original b/w drawings.

The first is 'A narrative of the campaigns and feats of arms of the 35th Regiment (Royal Sussex)'. It covers the regiment's activities during the French and Indian War and includes an account of the siege and capture of Louisbourg in 1758, British capture of Quebec in 1759, the French siege of Quebec in 1760 and the capture of Montreal, a march to Fort Ticonderoga, Saratoga, and Albany in 1761, a voyage to Barbados in 1761, the siege and capture of Martinique and Havana in 1762, a voyage to Saint Augustine Florida, Charleston, South Carolina, and Port Royal, Jamaica in 1763, and a voyage to Pensacola, Florida and a description of Mobile, Alabama (then part of West Florida), and other parts of West Florida, in 1765, and finally back again to England by way of Havana in 1765. Also included in this section are a copy of a letter from Major General Webb to Colonel Munro dated 4 August, 1757 documenting Webb's refusal to reinforce Bamford's regiment at Fort William Henry, and two anecdotes from 1759 and 1760 regarding Anglo-French battles fought outside Quebec.

The second dairy, running from January through December 1776, documents William Bamford's service in the 40th Regiment at Boston after the battle of Bunker Hill, during the winter and early spring of 1776, the British evacuation to Halifax, return to Staten Island, New York, the campaign on Long Island, and the occupation of New York City.