AUDREGNIES: The Flank Guard Action and the First Cavalry Charge of the Great War 24 August 1914 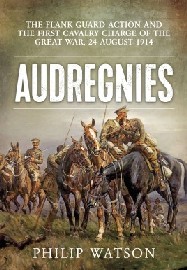 The book starts at the point the Germany army crosses the Belgium border and follows the individual stories of the key characters, Field Marshals and soldiers alike, military and civilian, German, Belgian, and French, of those who were to be intimately involved in the 'flank guard action at Elouges and the cavalry action of the 2nd Cavalry Brigade.

Includes a series of high-quality maps which help to explain the complexity of the action at Audregnies and Elouges, and is profusely illustrated, with pictures of those who were there. Draws together many unpublished diary accounts from all the regiments involved and period articles from the UK press illustrating the story as it unfolded back in England. Includes 43 b/w photos, 15 color photos, 10 b/w illustrations, and 18 b/w maps.

The analysis and critique is solely based around the actions of the units involved and has avoided some of the much repeated 'sound bites' which are not relevant to his story. The analysis is based around the instructions given to Field Marshal French by Lord Kitchener before he left and how the commanders implemented the tactics which had been articulated in their own specific to arms publications and the Field Service Manual 1909.