THE LEARNING PROCESS: The BEF's Art of War on the Western Front 1914-18 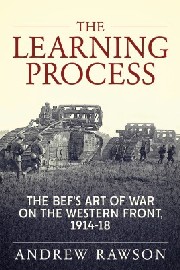 The men who went to war in August 1914 fought completely differently to those who survived until the Armistice on 11 November 1918. Analyzes the bloody learning process the British Expeditionary Force had to go through on the Western Front. Explains the development of the tactics, impact new weapons and ammunition, and new challenges of modified and improved German defensive tactics and upgraded fortifications. Includes 10 maps.

Each battle and campaign is studied in turn, starting with the first lessons learnt by the Old Contemptibles who served 1914 and the rigid attack plans of 1915. Next comes the rapid evolution of infantry and artillery plans during the Somme campaign in the summer of 1916 and the changes made to accommodate the tank in the autumn.

The important developments in combined arms warfare, and the German reactions to it, are followed through as the 1917 campaigns of Arras and Ypres are discussed. The year ends with a look at the Tank Corps' successes and problems which were highlighted at Cambrai.

The year 1918 starts with the huge German offensives across the Somme, the Lys, and on the Aisne. The strategic mistakes made before the battles, and the tactical decisions made during them, are looked at in turn. Finally, we see how the art of combined arms warfare matured during the offensives of July and August 1918, culminating with the breaking of the Drocourt-Queant Line and the Hindenburg Line in September.