EMPEROR'S OWN: Ethiopians in the Korean War 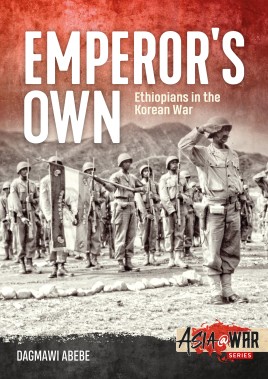 In response to North Korea's invasion of South Korea, Ethiopian Emperor Haile Selassie, a stalwart advocate of collective security, dispatched an infantry battalion composed of his Imperial Bodyguard to affirm this principle -- something the old League of Nations failed to do when Italy invaded Ethiopia in 1935. Includes 88 b/w photos, 8-page color section, 6 maps, 7 diagrams, and 1 table.

The unit (designated Kagnew Battalion) was actually successive battalions which rotated yearly and fought as part of the US 32nd Infantry Regiment, 7th Infantry Division. When they arrived, these warriors from an ancient empire were viewed with suspicion by their American allies as they were untested in modern warfare. Their arrival in Korea also coincided with the desegregation of the US Army.

However, the Ethiopians eventually earned the respect of their comrades after countless bloody, often hand-to hand battles, with all three battalions which served during the war earning US Presidential Unit Citations. Remarkably, Kagnew was the only UN contingent which did not lose a single man as prisoner of war or missing in action.