THE MILITARY AND POLICE FORCES OF THE GULF STATES: Volume 1 - Trucial States and United Arab Emirates, 1951-1980 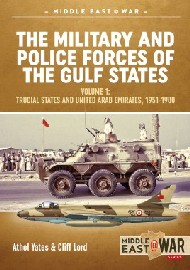 by Lord, Cliff and Yates, Athol

The military forces mainly evolved from Emiri (princely) and city guards into competent military organizations with some of the world most sophisticated military technology. British seconded and contract officers and men shaped these forces through establishing, leading, advising and training them.