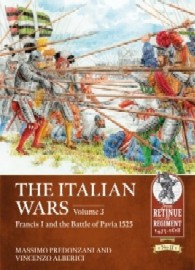 In the early hours of the 24th of February 1525, under the walls of the city of Pavia, the best Imperial army under Emperor Charles V fought against the French army under Francis I for the coveted prize of the Duchy of Milan. It was the decisive battle of what became known as the Italian Wars, a series of conflicts that for almost 30 years raged the length of the peninsula, fought by Europe's most powerful states. By the end of the fighting, the renowned Black Legion had been wiped out and the cream of the French heavy cavalry had been destroyed, by the massed ranks of drilled and disciplined Spanish arquebusiers. The French king and many of his nobles were prisoners of the enemy.

Examines prior events, from the Peace of Noyon in 1516 on, to places the armies at Pavia. The phases of the battle have been reconstructed and described in detail, comparing the many and varied accounts, whilst the site of the battle is examined for evidence of the fighting. Devotes one section of the book to the heraldry of the armies. Coats of Arms, heraldic devices, flags, and colors used are examined and reconstructed from original images and French, Spanish, and Italian sources. The culmination of this research is the creation of eight original color plates depicting the clothing, equipment, flags and heraldic devices of the armies at Pavia.