THE ARMY OF THE SWABIAN LEAGUE 1525 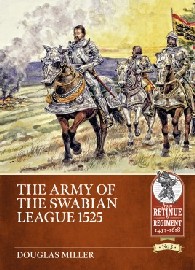 The Swabian League was established as a defensive alliance of princes, prelates, and Imperial cities to maintain the peace within the territory of Southern Germany. In 1525 the League faced an existential threat in the form of an attempt by the exiled Duke Ulrich of Wurttemberg to retake his territory and a series of localized peasant uprisings which united into a movement for political reform. Includes 43 b/w photos/ills, 9 b/w maps, 1 diagram, and 8 color plates.

The League was forced to mobilize a mercenary army at a time of financial crisis and a shortage of Landsknechts, many of whom were fighting in the Italian Wars. This book presents a detailed inside account of the different components and internal organization of the League army. It focuses on two campaigns led by its supreme commander, Georg Truchsess von Waldburg, to maintain discipline during an intensive six-month campaign to thwart the Duke of Wurttemberg and smash the peasant rebellion whilst attempting to appease his political overlords within the League.