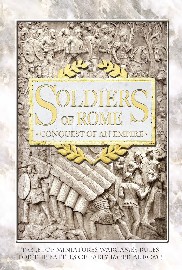 Rules set uses a deck of action cards (included) to give orders to your three battle groups (left, right, center), which consist of between 8-20 models (cavalry is 4-8 models) during a Raid, Battle, or Siege mission. You pick your force from three Army Lists (Roman Legions, Barbarians and Parthians) depending on the type of mission, so that a raiding force is different from a siege force. Further variations are included via an army's Strategems.

Each deck for a mission consists of a number of fixed cards plus a number of random cards, adding randomness to the card draws. The rules aren't scale specific, they will be playable at all scales, because the players pick the ground scale and measurements based on their miniatures collection and table-size.