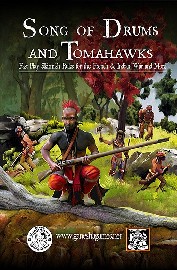 Skirmish-level rules set for warfare in the 18th century Eastern Woodlands of America. Players will generally control less than a dozen figures in multiplayer games, perhaps more in one-on-one contests.

Rules book also includes: Historical background detailing the Native American tribes and their Europeans foes (and sometimes allies); A map showing the locations of the major Native American tribes; Timeline covering the major and minor wars from European arrival in North America until the 2nd Seminole War; Army lists for the Native Americans, French, and British; Complete list of Traits to individualize your troops and reflect the various fighting styles of tribal warriors, European soldiers, or frontiersmen; Suggestions on how to set up games and scenarios; and description of warfare in this period.