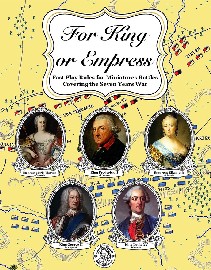 Big battle, miniatures game for refighting the Seven Years War, 1756-62. Everything you need to play is here, including: rules illustrated with diagrams and photographs; definitive resolution system; Scenario design from march-on attacks against a deployed defender to a positional grand tactical system conducted before the battle; Terrain generation; Point system; Army lists for all the major (and several minor) combatants of the Seven Years War, often broken into early and late-war periods; Two tiers of army sizes which allow you to field small forces quickly or expand them to major armies; Myriad of optional rules to tweak just the right feel for your games, or put them in a historical campaign context; and a flexible basing system, allowing you to use troops you already own or guide those just starting out.