FOR KING AND EMPRESS: War of Austrian Succession - A Supplement for For King or Empress Big Battle Rules 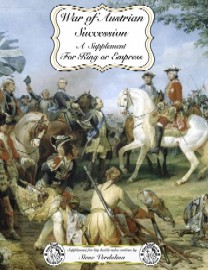 Supplement for the For King or Empress rules extends the rules mechanics, army lists, and troop values to cover the 1740-1756 period. Contains new and optional rules covering the War of Austrian Succession period, as well as updates for the Seven Years War. Also included are Army Lists and Troop Values for four major and nine minor combatants of the War of Austrian Succession. There are army commander ratings for 50 historical personalities, as well as ways to generate random commanders. A complete scenario with troop lists, special rules, and more covers the Battle of Mollwitz.