FOR WHAT WE HAVE DONE: The First Attack on Bellewaarde, 16 June 1915 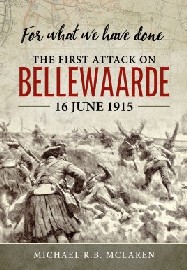 This study offers a detailed analysis of the enormous challenges faced by the British Army in the middle of 1915, and the risks it faced in undertaking operations while poorly equipped to do so, versus the risks posed by inaction. The decisions made to launch the offensive against the high ground on the low-lying hills commanding the eastern approaches to the medieval town of Ypres and known as Bellewaarde Ridge, are analyzed, along with the efforts made to mitigate the risks.

The outcome was dreadfully costly in human lives -- almost 4,000 casualties were suffered for a very limited territorial gain that saw German retention of the dominant ground. Still, serious attempts were being made to improve tactic, and implement new technology in a bid to overcome a strongly entrenched enemy in a frontal attack. While British attempts were continually, and effectively, thwarted by simultaneous improvements in German defensive methodology, they still represented the first tentative steps on a long and arduous course of improvement that ultimately led to the transformation of the British Army into the effective all-arms-force that played a significant role in the final victory of 1918.

Just after sunrise on 16 June 1915, two infantry brigades of British 3rd Division leapt out of their shallow trenches and charged out into No Man's Land. Their objective was a spur of German-occupied Ongoing enemy occupation of this tactically vital sector afforded the Germans almost unbroken observation of movement within the salient and seriously imperiled the nascent British positions therein. What followed, on that hot summer's day, was a somewhat typical British disaster of the early fighting on the Western Front. Worse than that, it appeared that many of those casualties had fallen victim to friendly fire as the British artillery failed to appreciate the progress of the infantry, and rained shells down onto the recently occupied German trench system.

It is easy to cast the blame, for the disaster that unfolded on Bellewaarde Ridge, on inept British leadership. The common perception is that senior officers, oblivious to the emerging challenges of the trench stalemate and comfortably quartered in safe rear areas, sent thousands of ill-equipped, brave British soldiers to face barbed wire, machine guns and heavy artillery fire without a plan, or even so much as a steel helmet for protection-small wonder so many failed to return. The reality, however, was considerably more complicated and is worthy of detailed examination if we are to prevent an injustice to the memory of the participants.

The action at Bellewaarde was conducted by a British Army that was struggling to undertake an unprecedented expansion and re-arming programme, whilst simultaneously fighting to maintain the integrity of a precarious coalition, the fragmentation of which could have lost Britain the war in short order. It was authorized and coordinated to provide support for a considerably more extensive French operation, already underway in Artois, that had in turn been launched, in part, to support the beleaguered Russian Army, still reeling from the onslaught of a recently initiated and bloody German offensive in the east. Only in the wider context of the prevailing coalition warfare can events at Bellewaarde be properly assessed.