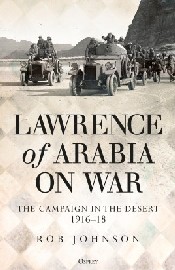 One hundred years ago, Captain Lawrence and an unlikely band of Arab irregulars captured the strategic port of Aqaba after an epic journey through waterless tracts of desert. Their attacks on railways during the Great War are well known and have become the stuff of legend, but while Lawrence himself has been the subject of fascinating biographies, as well as an award-winning film, the context of his war in the desert, and his ideas on war itself, are less well-known.

This new title offers a high-paced evaluation of T. E. Lawrence 'of Arabia' and the British military operations in the Near East, revising and adding to conventional narratives in order to tell the full story of this influential figure, as well as the Ottoman-Turkish perspective, and the Arabs' position, within the context of the war. It is also a study of warfare and the manner in which Lawrence and others made their assessments of what was changing, what was distinctive, and what was unique to the desert environment. This book sets Lawrence in context, examines the peace settlement he participated in, and describes how Lawrence's legacy has informed and inspired those partnering and mentoring local forces to the present day.