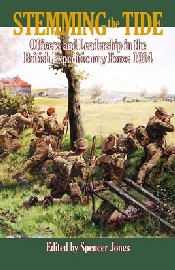 The British Expeditionary Force of 1914 was described by the official historian as 'incomparably the best trained, best organized, and best equipped British Army that ever went forth to war.' The BEF proved its fighting qualities in the fierce battles of 1914 and its reputation has endured. However, the same cannot be said for many of its commanders, who have frequently been portrayed as old fashioned, incompetent, and out of touch with events on the battlefield. B/w photos, 8 pages of color maps

Yet the officers who led the BEF to war were every bit as professional and hard-bitten as the soldiers they commanded. These officers had learned their craft in the unforgiving school of colonial warfare and honed their understanding of conflict in the period of reform that reshaped the army between 1902 and 1914. As this book reveals, when faced with the realities of modern combat, the officers of the BEF were prepared for the challenge.

This collection offers a broad picture of command at all levels of the BEF through a series of biographical essays on key officers. Drawing upon much original research, each chapter explores the pre-war background and experience of the officer and assesses his performance in combat in the opening months of the First World War. The book features insightful reappraisals of famous figures including John French and Douglas Haig, fresh studies of staff officers such as William Robertson and Henry Wilson, and a thorough discussion of officers at 'the sharp end', with chapters covering divisional, brigade, battalion and company commanders.

The essays reveal an officer class that, despite certain weaknesses, provided highly effective leadership during the chaotic fighting of August to November 1914. Without their influence it is unlikely that the BEF would have been able to survive the difficulties of the 'Great Retreat', much less halt the German invasions of France and Belgium.

This book will be of great interest to anyone who studies the First World War, and of particular value to those who seek a greater understanding of the British Army of the era.