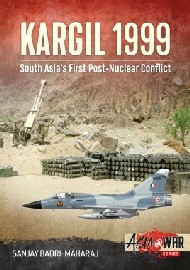 Kargil 1999 is the first ever military history of this conflict in the English language. It examines the political and strategic situation in the run-up to the conflict, the precarious position of the Indian government, and the disconnect between the Pakistani civilian government and its armed forces. Moreover, it provides a detailed review of the state of the Indian and Pakistani armed forces as of 1998-1999, with particular attention to their organization, orders of battle, their air forces and air defense networks. Because the Kargil War of 1999 was the first conflict during which both India and Pakistan were in possession of nuclear weapons, this account provides a detailed review of their related potentials - including stocks of fissile materials, and delivery systems (manned aircraft and the burgeoning indigenous ballistic missile programs of increasing sophistication).

Finally, Kargil 1999 provides a detailed account of ground combat, which culminated in the Indian infantry storming the heights occupied by the Pakistani infantry, while supported by artillery and air force.

Illustrated by more than 100 photographs, maps, and authentic colour artworks, Kargil 1999 offers a military perspective of the first confrontation of the two declared nuclear powers of South Asia - a conflict that tested their political, military, diplomatic, and nuclear resolve.