Victory at Gallipoli, 1915 - The German-Ottoman Alliance in the First World War 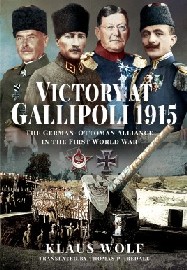 The German contribution in a famous Turkish victory at Gallipoli has been overshadowed by the Mustafa Kemal legend. The commanding presence of German General Liman von Sanders in the operations is well known. But relatively little is known about the background of German military intervention in Ottoman affairs. 111 B&W illustrations & 13 color maps

Klaus Wolf fills this gap as a result of extensive research in the German records and the published literature. He examines the military assistance offered by the German Empire in the years preceding 1914 and the German involvement in ensuring that the Ottomans fought on the side of the Central Powers and that they made best use of the German military and naval missions.

He highlights the fundamental reforms that were required after the battering the Turks received in various Balkan wars, particularly in the Turkish Army, and the challenges that faced the members of the German missions.

When the allied invasion of Gallipoli was launched, German officers became a vital part of a robust Turkish defense - be it at sea or on land, at senior command level or commanding units of infantry and artillery. In due course German aviators were to be, in effect, founding fathers of the Turkish air arm; whilst junior ranks played an important part as, for example, machine gunners. This book is not only their missing memorial but a missing link in understanding the tragedy that was Gallipoli.