North Korea's Armed Forces - On the Path of Songun 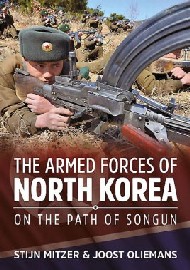 by Mitzer, Stijn and Joost Oliemans

Provides information on a plethora of never-before described North Korean weapons systems and modernization programs to generate an accurate description of the its capabilities in both symmetrical and asymmetrical warfare. includes 110 color and 15 b/w photos, approximately 46 color profiles, four maps, and three tables.

Covers the most important events from the inconclusive ceasefire struck at the end of the Korean War to modern day, with an especially heavy emphasis on the current status of the Korean People's Army. Examines indigenously designed weaponry, secret projects, tactics, and deadly flare-ups between the North and the South. Includes evidence covering tragic incidents such as the Cheonan sinking and Yeongpyeong bombing of 2010.

Moreover, an up-to-date, comprehensive listing of the equipment holdings of several branches of the Korean People's Army is included, offering a numerical assessment of its naval and aerial capabilities. From the recently introduced stealth missile boats, ballistic missile submarines and main battle tank families to their often-ignored indigenous aircraft industry, virtually all indigenous weapons systems are discussed extensively. Offers answers to many questions raised by the minefield of contradictory statements and misinformation that make up current intelligence about this reclusive nation.