The Commotion Time - Tudor Rebellions of 1549 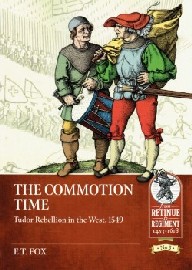 Examines the military history of two major rebellions and several minor uprising occurred spontaneously throughout England in 1549. In East Anglia Robert Kett, aggrieved at the abuses of enclosure, laid siege to Norwich until defeated by Royal forces at the bloody battle of Dussindale. At the same time, thousands of commoners of Devon and Cornwall rose up against the introduction of the English-language Book of Common Prayer and the systematic destruction of their traditional faith. Like Norwich, Exeter was besieged throughout the long summer until, in a brutal campaign by government forces and hired foreign mercenaries, the rebellion was finally suppressed. Includes 32 b/w ills & photos, 11 maps, and numerous tables.

Previous histories of the rebellions of 1549 have explored their causes in great depth, but little attention has been given to the military history of the campaigns. Yet the mid-Tudor period rests on the cusp between a medieval form of warfare and the new emerging ideas that defined warfare in the early-modern period, making the battles of 1549 of crucial importance in understanding the transition between the two. Explores how the 'medieval' rebels of the Devon and Cornwall militias fared against the German pikemen and Italian arquebusiers the government sent against them.