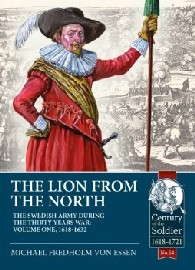 Describes and analyses the early modern Swedish army, with a particular emphasis on the reforms introduced by King Gustavus Adolphus before and during the Thirty Years War. Also expands our understanding of the Swedish army during the Thirty Years War with focus on its operations on the eastern front against Russian and Polish opponents as well as the better-known operations in Germany against the Catholic League and the Holy Roman Empire. Includes 119 b/w illustrations, 10 b/w maps, 15 tables, 32pp color plates.

Sweden had a long history of conflict with neighbouring countries, and the reforms introduced by King Gustavus Adolphus had their origin in wars fought in the early seventeenth century, before or in the early phases of the Thirty Years War. The Kalmar war with Denmark, the Novgorod and Pskov campaigns in Russia, the conquest of Livonia, and the war with Poland played important roles in preparing the Swedish army for the wars on the continent from 1630 onwards.

While some of the technical and tactical innovations attributed to the Swedish Army in the Thirty Years War are myths, others were real. Possibly of yet more enduring importance were the Swedish Chancellor Axel Oxenstierna's administrative reforms. A conscription system was established which consistently managed to raise troops, despite the small population of Sweden and its territories. A logistics system was introduced which could supply the armies, despite the vast geographical depth of operations. The intelligence service was developed into a comprehensive support establishment to military operations. It is fair to say that the Swedish army that entered the Thirty Years War and the organisation that enabled it formed the foundation for the subsequent Swedish rise to regional great power status. While the army of Gustavus Adolphus has been described elsewhere, the book includes current research that has not yet appeared in the English language.