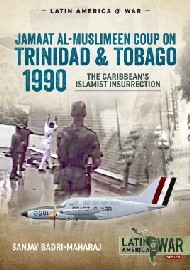 On 27 July 1990, a radical Afro-Trinidadian Islamist group, the Jamaat-al-Muslimeen, led by Imam Yasin Abu Bakr -- an Afro-Trinidadian convert to Islam previously known as Lennox Philip, and a former policeman -- launched an armed insurrection with 113 of his followers. Their attack quickly sacked the entire leadership of the local government: the then Prime Minister of Trinidad, Arthur N.R. Robinson, most of his cabinet and several opposition Members of Parliament, plus the staff of the government-owned television and radio networks were held hostage for six dramatic days. The Parliament Building, the television, and radio studios were occupied by armed insurgents and were severely damaged during the standoff with security forces that ensued. The Trinidad and Tobago Police Service collapsed within the first hour of the insurrection, abandoning the capital city, Port of Spain, and the military took hours to assemble a viable fighting force.

This book details the background, the insurrection, and the military operation that crushed it. Illustrated with maps, color profiles, and more than 100 authentic photographs from local archives.