HEADHUNTER: 5-73 CAV and Their Fight for Iraq's Diyala River Valley 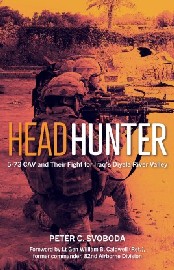 Headhunter is a soldier's story, told by those very paratroopers who gallantly fought to tame Diyala in 2006-2007. Based on dozens of interviews conducted by the author, the narrative describes the danger of combat, the loss of comrades, and the struggles of returning from a deployment. The voice of the families left behind are also included, describing the challenges they faced, including the ultimate challenge-grappling with the death of a loved one. This book explores the human dimensions of loss and struggle and illustrates the sacrifices our service members and their loved ones make.

Selected in 2005 by the Army to be the first airborne reconnaissance squadron, 5th Squadron, 73rd Cavalry Regiment, better known as 5-73 CAV, was formed from 3rd Battalion, 505th Parachute Infantry Regiment. The members of the squadron were hand-selected by the squadron command team, Lieutenant Colonel Poppas and Command Sergeant Major Edgar. With just more than 400 paratroopers, they were half the size of a full-strength battalion and the smallest unit in the Panther Brigade.

The squadron deployed to eastern Diyala in August, 2006. Despite their size, they were tasked with an enormous mission and were given the largest area of operations within the brigade. Appropriately for a unit known by the call sign of its CO-Headhunter-5-73 would go on to pursue various terrorist factions including Al Qaeda in Iraq. They got results, and 5-73 was awarded the Presidential Unit Citation for launching the Turki Bowl campaign from November 2006 to January 2007 against insurgent groups in Diyala Province. However the toll would be heavy-the squadron lost twenty-two paratroopers during the deployment.