THE BATTLE OF BELEEWAARDE: June 1915 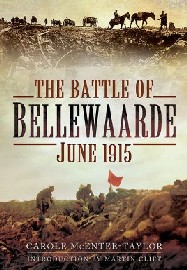 At the close of the 2nd Battles of Ypres, the German trenches between the Menin Road and the Ypres-Roulers railway formed a salient. From Bellewaarde ridge, situated on the eastern side of the lake, they were able to overlook the greater part of the ground east of Ypres. In early June it was decided to attack the salient, and take possession of Bellewaarde ridge. The attack was to be carried out by the 9th Brigade of the 3rd Division, with 7th Brigade in support.

It was 2am on the 16th June 1915 and dawn was slowly breaking over Bellewaarde. It was exceptionally quiet, the troops of 3rd Division were situated on the western edge of Railway Wood and shrouded in a thick mist which reduced visibility and gave the illusion of safety. Across the few yards of no mans land, the German troops of Reserve Infantry Regiments (RIR) 248 and 246, and Unter-Elsssisches Infanterie-Regiment Nr. 132 were also blanketed in the thick damp mist. It swirled round their trenches, deadening sound and reinforcing the illusion that all was secure. Fifty minutes later the planned British artillery bombardment began. By the end of the day more than 4,000 men would be casualties on a field approximately half a mile square.