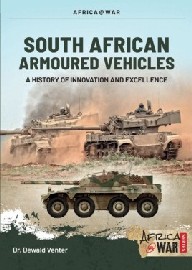 Subjected to international sanctions due to its policies of racial segregation, known as Apartheid, South Africa was cut off from sources of major arms systems from 1977. Over the following years, the country became involved in the war in Angola, which gradually grew in ferocity and converted into a conventional war. With the available equipment being ill-suited to the local, hot, dry and dusty climate, and confronted with the omnipresent threat of land mines, the South Africans began researching and developing their own, often groundbreaking and innovative weapon systems.

The results were designs for some of the most robust armored vehicles produced anywhere in the world for their time, and highly influential for further development in multiple fields ever since. Decades later, the lineage of some of the vehicles in question can still be seen on many of battlefields around the world, especially those riddled by land mines and so-called improvised explosive devices.