LEPANTO 1571: Christian and Muslim Fleets Battle for Control of the Mediterranean 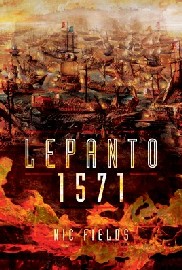 The battle of Lepanto was the last major battle between fleets of oar-powered war ships. The battle of Lepanto has long been considered one of the decisive naval battles of history. Yet, the savage fighting on Sunday, 7 October 1571 left the strategic map unchanged and the defeated Ottoman Turks were able to replace their losses and launch a new fleet the following year. Includes 20 color illustrations.

Re-examines the battle and concludes that, while it merely confirmed a strategic reality that had already emerged during the 16th century (i.e. that naval supremacy lay with the Sublime Porte in the eastern Mediterranean, and with Habsburg Spain and its Catholic allies in the western Mediterranean), it's vital importance was psychological. It sank the perception of Ottoman dominance and the inevitability of Islam's westward encroachment beyond the Balkans.

With over 200 ships per side, it was the largest naval battle in sixteen centuries and the last major fight between fleets composed entirely of the muscle-driven galley. These slender ships were the direct descendants of the Classical trireme but carried cannon and marines bearing firearms, although massed archery and cold steel still played a major role on the fateful day.