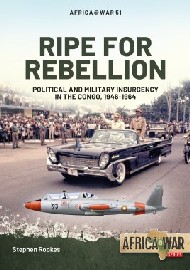 The Belgian Congo received its independence in June 1960, starting a bitter internecine political battle which would tear the Congo apart. Hundreds of white mercenaries then were hired for the secession of Katanga province, but ultimately the UN forced them out and ended the rebellion in 1963.

Other rebellions, notably Stanleyville, Kindu, and Kivu Rebellions, aided by the Soviet Union, Republic of China, and radical African governments, became a proxy war between the East and the West. That drew the US into the conflict. Includes 85 b/w photos, 1 color and 6 b/w maps, 16 color profiles, 6 color figures, and 3 tables