FOR GOD AND THE CIA: Cuban Exile Forces in the Congo and Beyond 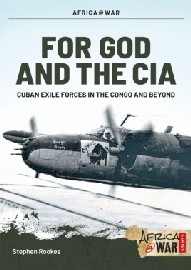 Sequel to Ripe for Rebllion covers CIA activities starting in 1962 during the Congo Crisis by fielding a small air force that grew rapidly in size and power and provided air cover to government forces in operations against anti-government forces up to 1967.

The CIA then fielded a naval force to patrol Congolese waters and to prepare areas for attacks made by mercenaries. The presence of this navy proved to be crucial in limiting supplies and persuaded Ernesto 'Che' Guevara that his attempt to provoke widespread communist revolution in Central Africa was forlorn. Details how over 150 Cuban exiles known as the Makasi were recruited for missions in the Congo.