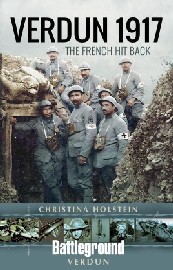 Unlike the popular view, the French army did not cease offensive operations after the disastrous Nivelle Offensive of spring 1917 and the subsequent mutinies. Nor did the fighting at Verdun come to an end in 1916. Includes 75 black and white illustrations.

The successful French counter offensives at the end of that year led to preliminary planning for a two Army operation in 1917 to break out of the Verdun salient and recapture the strategically very significant Briey coal basin. The French Army mutinies of May and June 1917 led to a more limited version of the plan being implemented, with the aim of establishing new lines for a break out in 1918.

The need to rebuild morale in the French army meant that nothing was left to chance. The immense logistical effort of this late summer 1917 campaign and the detailed planning and careful training at all levels brought success to an army weary of war but determined to win. The industrial nature of the preparations, the spectacular numbers of guns and the first appearance of the Americans at Verdun presage the campaigns of 1918 and the final Allied victory.

As for all the books in the Battleground Europe series, it is profusely illustrated and mapped using contemporary and modern material, supported by clear maps to support each of the tours.