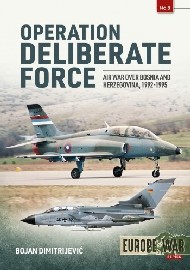 As Yugoslavia fractured, the war in Bosnia was in its third year as of 1995 and fought between Bosnian Serbs, supported by Belgrade; Bosnian Croats, supported by Zagreb; and Bosnian Muslims. It was characterized by widespread atrocities against civilians, which prompted hundreds of thousands to flee. The United Nations' attempts at finding a negotiated settlement proved fruitless, despite the deployment of a sizable contingent of peacekeepers. On the contrary, the Bosnian Muslims began receiving ever larger amounts of clandestine support from Iran, and also from Saudi Arabia and several other allied countries in the Middle East, while the USA began supporting the Croats. Upon constantly increasing popular pressure, the United Nations requested the North Atlantic Treaty Organization (NATO) to intervene. Includes 88 photos, 8 maps, 1 diag, 6 tables, and 15 color profiles and based on local, USA, and NATO archives.

Officially at least, NATO initiated Operation Deliberate Force on 30 August 1995: deploying as many as 400 combat aircraft, over the following two weeks it flew 3,515 sorties against 338 Bosnian Serb targets. The damage caused by this assault forced the Serbs to lift the siege of the Bosnian capital of Sarajevo, remove heavy weapons from the UN-declared exclusion zone around the city, and safeguard other UN safe areas.

However, Operation Deliberate Force was only the official part of what was going on in Bosnia during these days. Less-well-known is that Washington and Zagreb exploited the opportunity to run a series of offensives against the Serbian forces in Croatia and in Bosnia, forcing these into a general withdrawal towards the north-east. It was only in this way that Belgrade was eventually forced into negotiations that resulted in the Dayton Agreement, reached in November 1995, which brought the war in Bosnia to an end.