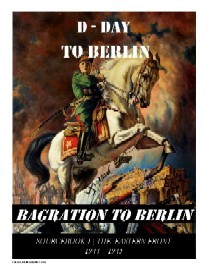 Operation Bagration was the codename for the 1944 Soviet Belorussian Strategic Offensive Operation a military campaign fought between 23 June and 19 August 1944 in Soviet Byelorussia in the Eastern Front of World War II. The Soviet Union destroyed 28 of 34 divisions of Army Group Centre and completely shattered the German front line.

Bagration to Berlin provides the TO&E for the German and Russian Divisions that took part in this theatre from Spring of 1944 to the fall of Germany in Spring of 1945. Also included are designer notes and the scenario The Battle of Targul Frumos, May 1944 where the Panzer Grenadier Division Grossdeutschland commanded by Lieutenant General Von Manteuffel, the Panzer Baron, made a gallant stand in Rumania. New rules include ranged fire by heavy anti tank guns and tank riders. Includes designer notes and much more.