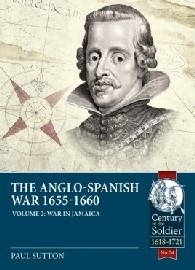 In 1655, England's Lord Protector Oliver Cromwell sent a fleet to attack and seize Spanish possessions in South America as part of effort to influence international events for political, religious, and commercial reasons. chose to attacked a weakened Spain in the West Indies believing it a soft target. In late 1654 possibly the largest military force to date ever to leave English shores set sail from Portsmouth under the command of General Robert Venables and Admiral William Penn.

Describes the reasons for war with Spain, the army and fleet assembled at Cromwell's bidding and its objective. The attack on Hispaniole in April 1655 will be explained in detail along with the reasons for its failure as will the occupation of Jamaica as will the beginnings of the Spanish war of resistance. A subsequent volume will recount the war on Jamaica from the end of 1655 until 1660. Includes 18 color illustrations.