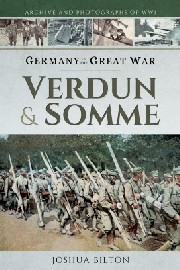 For the Central Powers, 1916 was a year of trial and error, of successes and failures, of innovation, and of drastic changes. Tactics evolved, while war aims mutated to suit the inertia of trench warfare. Advances were aided, and often effectively countered, with the development of new weaponry.

Across all fronts, whether at home or in Poland, citizens and soldiers alike stood fast against Entente forces. On the Western Front, bitter fighting continued apace. To the east the armies of Austro-Hungary, Germany, and Bulgaria battled Entente forces. Meanwhile at sea, the German High Seas Fleet ambushed the Royal Navy off the coast of Denmark. On the Home Front, the poor harvest of 1916, coupled with a lack of transport, led to a winter of stark deprivation. As a consequence, the German government introduced what was effectively a system of rationing entitled, 'sharing scarcity.' In the south, Ottoman forces fought Allied soldiers for control of Kut and Erzurum, a fortified trading port in eastern Turkey.

Includes 500 contemporary photographs, many of which have never before been published.