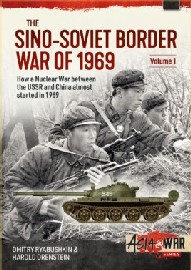 On 2 March 1969, a specially prepared Chinese army detachment made a surprise attack on the Soviet border guards who were patrolling the border sector in the area of Damansky Island on the Ussuri River. In the subsequent battle, the dead alone on both sides numbered more than 50. Two weeks later, on 15 March 1969, a much larger battle took place in this same area, in which the two sides used artillery and armored vehicles; the casualties numbered in the hundreds. Includes 65 b/w photos, 3 color profiles, 6 color figures, 1 color and 8 b/w maps.

The first volume of this two-part mini-series examines, among other things, the historical and political precursors of the 1969 events, the reaction to them in different countries, and the battle of 2 March 1969. Principal attention is focused on a detailed chronological description of the battle, Soviet and Chinese tactics, and the weapons used. Inasmuch as the present state policies in Russia and China are aimed not only at keeping silent about the 1969 events, but also opposing any attempts to study what happened in detail, the authors have relied on finding veterans of the battles and obtaining from them documentary evidence of those distant events.

There were conflicts along the entire Sino-Soviet border - from Primorye to Central Asia - in the following weeks and months. Although smaller in scale than the Damansky events, men still died in them. Shooting on Damansky continued practically into mid-September.

On 13 August 1969 there occurred one more large-scale military clash, in the area of Lake Zhalanashkol, after which the political leadership of the USSR and PRC recognised the very real possibility that the border war might escalate into a full-scale war, with the potential use of nuclear weapons.The authors believe that this study is the most detailed and objective work on the theme of the 1969 Sino-Soviet border war.