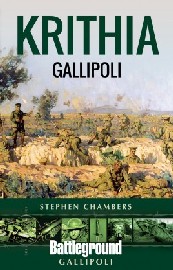 Krithia was a key objective in the land offensives; a killing ground greater than Anzac or Suvla. Recounts the landings at Helles of 25 April 1915 and subsequent bitter attempts to capture the village and the vital high ground of Achi Baba. General Hunter-Weston's weakened 29th Division achieved little during the first two bloody battles of Krithia, even when reinforced by the Anzacs, 42nd Division, Royal Naval Division, and the French. The allies had little to show from their costly daylight frontal attacks, apart from a slightly firmer footing ashore and a growing casualty list.

As the military situation looked to degenerate into a Western Front style stalemate, General Sir Ian Hamilton pushed for a final battle of Krithia. Using Hunter-Weston's newly formed VIII Corps and General Gouraud's French Corps Expeditionnaire d'Orient, the Third Battle of Krithia launched on 6 June 1915. Despite a promising start, the attack soon collapsed against a stubborn Turkish defence. Although some lessons had been learnt from earlier failures, underestimation of the enemy was not one of them.

Includes a rich mix of letters, diaries, photographs, and maps of Gallipoli's most costly battles. Includes 176 pages of integrated illustrations.