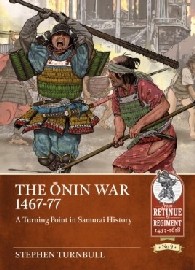 Draws on previously untranslated primary sources to set the famous yet misunderstood 15th century Onin War in its true context. Begins with the glory days of Ashikaga Yoshimitsu who made the position of shogun into something that was admired and respected, and left a legacy symbolized by his famous Golden Pavilion. Includes 63 b/w ills, 13 color plates, and four maps.

Within decades all that he had achieved seemed to have been lost. In 1441 the reigning shogun Yoshinori, Yoshimitsu's son, had been murdered by a jealous rival. The Bakufu (shogunate) had somehow survived, but Yoshinori was succeeded first by a son who never reached manhood and then by another young son called Yoshimasa. He was to reign for 49 years in a turbulent age. Not only did Yoshimasa have to face up to his background of family tragedy; unprecedented waves of rioting by farmers shook the ruling classes as much as any wars could have done, and all this happened to a background of famines, droughts and floods that killed more people than any of the battles ever did. Yoshimasa had several armed conflicts to contend with, which culminated in a succession dispute over his own choice of heir. This launched the Onin War.

What made the Onin War unique was the fierce street-fighting that went on within Kyoto itself. The battles were conducted from fortified mansions, which were surrounded by stout wooden walls and ditches and sported tall observation towers. In one such fight in the summer of 1467 eight cart-loads of heads were taken as trophies, but within months the conflict deteriorated into a stalemate where night raids were launched and large stones were flung by catapult. At the same time huge areas of Kyoto were needlessly burned out by careless attacks from ashigaru, whose looting and destruction went far beyond the enemy positions and took in temples, mansions and commoners' dwellings.

The greatest loss of all was the disappearance of loyalty to the shogun. His former deputies in the provinces seized power in their local areas. Such was the beginning of the Sengoku Period: Japan's 'Age of Warring States'.