BATTLEGROUP!: The Lessons of the Unfought Battles of the Cold War 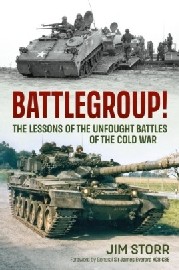 Discusses whether any supposed British superiority at the unit level, or superior American equipment and technology, would have as much effect on stopping a possible Warsaw Pact attack as the Bundeswehr's apparent mastery of formation tactics.

Investigates the unfought land battles of the Cold War on the Central Front of the 1980s and looks solely at high-intensity, conventional warfare largely from NATO's perspective. Concentrates on the lower tactical levels: how a company to brigade might delay, defend, and withdraw then switch to advance, attack, and counterattack. Covers fighting in woods, built up areas, and at night as well as role of air support on land operations. Considers the tactics, organization and equipment and of the American, British, West German, French and Soviet armies. Includes 15 b/w maps, 26 figures, 2 graphs, and 15 tables.