THE PERFECT MILITIA: The Stuart Trained Bands of England and Wales 1603-1642 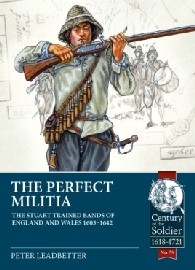 Covers the Trained Bands of the early Stuart period, from 1603 to 1642. Both James I and Charles I tried to create a perfect militia during their reigns, but how far did they get in achieving this aim? There is very little published about this organization. This book includes details on the men who served in it; how they were recruited; their social status, professions and ages. Includes 11 b/w illustrations, 2 b/w maps, and 36 tables.

The soldiers were mustered for training at least once a year at county or regimental level, but were they mustered and trained more often at a local level? And, if so, how often? There were different categories of soldiers in the Trained Bands; these categories were not just designated by the arm of service or by the arms they carried, but also by who had provided (and paid for) them.

The arms and armor used by the soldiers changed over the period covered by this book and descriptions of these are included. Did the men of the Trained Band wear uniforms? Who were the officers who commanded the companies and regiments and how were they appointed? This book aims not only to answer these questions, but also to enlighten the reader on many other aspects of this important organization.

Defense always costs money, and this was especially true of the Trained Bands. Men and muster-masters had to be paid and fed; powder and match bought for training; new arms and armor sourced. All these needed money - money that was in many cases only grudgingly given. The methods of raising this money were varied and in the main seem to have worked.

Relations between the counties and the government in London are also covered. The government's requests or requirements were not always well received; many people in the counties did not like being given orders from London, a place they believed to have little interest in what was happening locally.

The Trained Bands were not put to the test of battle prior to the Civil War, although they had come close in the Bishops' Wars; but they proved reluctant to act against ordinary people during protests about perceived or actual local grievances.