THE BATTLE OF NORDLINGEN 1634: The Bloody Fight Between Tercios and Brigades 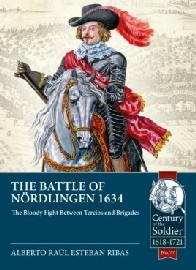 The King of Hungary Ferdinand, heir to the Holy Roman Empire, decided to assume command of the armies in the West and thus enhance his leadership. He asked the Cardinal-Infante Fernando to help him conquer a small town, called Nordlingen, and together they could fight a Swedish-German army, commanded by Generals Gustav Horn and Bernard of Saxe-Weimar.

Explains the general situation in Germany during the Thirty Years' War in the period 1633-1634; describes in detail the tactics, armament, and units of the Spanish, Swedish, and Imperial armies; and analyzes the conflicting interests of the various powers fighting the war.

Examines the battle that took place in the plain of Nordlingen, describes the various protagonists who commanded the Tercios and Regiments that fought there, and analyzes the mistakes and successes of the generals. With all this, the stereotypes about the Spanish and Swedish tactical models are reviewed, which for a long time were the paradigm of tactics in European battle theaters. In this way, it seeks to answer which deployment was better, if the Swedish Brigades, or the Spanish Tercios.