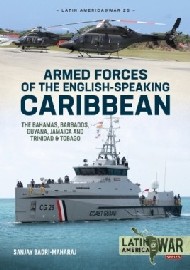 Covers from the post-WWII West India Regiment to the independence of the former British Colonies in the 1960s and 1970s. The failed West India Federation led directly to the formation of the national armed forces of Jamaica, Trinidad and Tobago, and Barbados while Guyana's forces had their roots in Police Special Services Units and a Volunteer Force. Shortly after Independence, Guyana's armed forces found themselves in a border conflict with Suriname as well as a far less salubrious operation to support a corrupt and racist government through rigged elections. Trinidad found itself facing a mutiny in the Trinidad and Tobago Regiment, redemption only coming for the force in 1990 when it played a stellar role in quelling an Islamist insurrection. Barbados and Jamaica's armed forces had a more subdued history, supporting police forces but playing an important role in the intervention in Grenada in 1983. The Bahamas, unique in having a naval force as its primary military unit, had the dubious distinction of having one of its patrol boats sunk by Cuban MiG-21s in 1980.

Besides the historical background to the five armed forces in question, examines the evolution, equipment, and current status and plans of these forces. This includes the complete recapitalization of the Jamaica Defence Force, the resurrection of the Bahamas Defence Force as a capable naval unit, the decline and deliberate neglect of the Guyana Defence Force and the revival and near collapse of the Trinidad and Tobago Defence Force.