THE BATTLE OF SEKIGAHARA: The Greatest, Bloodiest, Most Decisive Samurai Battle Ever 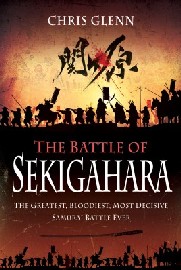 Sekigahara was the greatest samurai battle in history. Japan had long been at civil war until brought under the rule of Oda Nobunaga, and then, following his death at the hands of a traitorous general, that of Toyotomi Hideyoshi. It was Hideyoshi who completed the unification of Japan and ushered in a period of peace.

After Hideyoshi's death in 1598, a power struggle emerged between those loyal to the Toyotomi, and those who supported the second most powerful warlord, Tokugawa Ieyasu. With Hideyoshi gone, Ieyasu made moves that brought the ire of a number of his contemporaries, and soon the entire country was divided into two great armies, East and West. Leading the loyalist cause was Ishida Mitsunari, who gathered a force of around 130,000 samurai, while the Tokugawa commanded just 80,000.

Reveals the developments in Japan that led up to the outbreak of war, the characters involved, how the battle itself unfolded, and the aftermath. The weapons and armor of the time are also fully explained, along with little known customs of the samurai and their warfare.