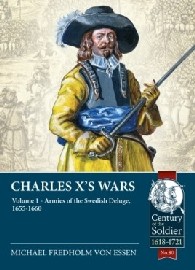 Explains the continued development of the Swedish Army after the Thirty Years' War and provides full details on the dissimilar military systems of the Polish-Lithuanian Commonwealth, Brandenburg-Prussia, Muscovite Russia, Cossack Ukraine, Transylvania, the Crimean Tatar Khanate, and the Imperial expeditionary forces engaged in the Swedish Deluge.

By invading the Polish-Lithuanian Commonwealth, King Charles, an experienced former general from the Thirty Years' War, saw an opportunity to put an end to the Polish King's claim to the Swedish throne and to gain additional territories which would enable him to control the Baltic Sea maritime trade.