NAVAL AVIATION IN THE KOREAN WAR: Reflections of War - Vol1- Cover of Darkness 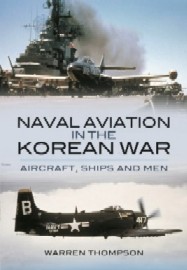 Covers the role of US aircraft carriers and aircraft in stopping the North Korea's initial push to the south and their support during the Inchon Landing and Pusan Perimeter Break out. The last part of the first chapter deals with naval operations during the Marine's Chosin Reservoir march to the sea in December 1950. The book goes on to describe the stabilization of the front lines after the Chinese had entered the war during 1951. Includes 3x16pp color plates with 250 images (75% color and 25% black and white).

At this time, the emphasis for naval air operations is centered on interdiction behind the lines. The focus is on trying to stop road and rail traffic from resupplying the communist troops and allowing them to build up to a major offensive. Also, it includes the entry of the F2H Banshee into carrier operations which gave the USA four major types of aircraft to wage the war.