ON THE BORDERLANDS OF GREAT EMPIRES: Transylvanian Armies 1541-1613 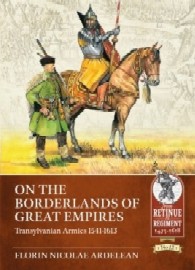 In 1526, the army of the Hungarian kingdom was soundly defeated by the army of the Ottoman sultan, Suleiman the Magnificent, in the battle of Mohacs. In the following decades the lands that were once part of the Hungarian Crown were divided. On the eastern half of the former Hungarian kingdom a new state was born, the Principality of Transylvania. For one and a half century (1541-1691), Transylvania was a distinct state on European maps, and played an important military and strategic role in the struggle between the Ottomans and the Habsburgs in Central and South-East Europe. Includes 19 b/w illustrations, eight color plates, five maps, and one table.

This book follows the efforts of the Transylvanian rulers to organize and to defend their new state, during its first seven decades of existence (1541-1613). The army at their disposal inherited an essentially medieval structure that reflected the social composition of the region. The bulk of the army consisted of the so called 'county flags' (noble levies and conscripted peasants from their estates), the Szekely levies (troops recruited in the districts of South-East Transylvania) and the troops supplied by the Saxon districts from the highly urbanized southern parts of Transylvania. In addition, the Transylvanian army also had several groups of professional soldiers that performed permanent or semi-permanent military service: the court guard (aule milites), the garrisons of the main fortifications concentrated on the western frontier of the principality and other groups that performed military service in exchange for tax exemptions like the riflemen (pixidari, puscasi, puskasok) and the guardsmen (darabontok, darabanti).

The last chapter of the book is focused on the main military campaigns in which the Transylvanian army was involved (the expedition of Giovanni Battista Castaldo in Transylvania and the Banat region 1551-1553, the Fortress War period 1552-1571, the Long Turkish War 1591-1606, etc.), with extensive descriptions of some of the most important pitched battles and sieges.