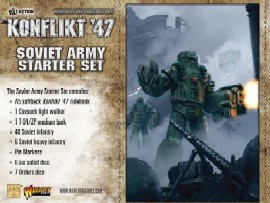 March 1947. As Europe emerged from the worst winter in living memory the Soviet war machine is replenished and ready for action. 1946 was not the greatest year for The Motherland, although the German invaders were repulsed in their efforts to invade. After reverses before the winter set in, the Soviet war machine is now ready to roll west and crush the German foes before them.

The tireless efforts of brave Soviet scientists have meant the technology of the enemy is now available against them. The Cossack walker is fast and carries a heavy cannon, able to defeat it's recce counterparts at distance, and the new Heavy Infantry suits can tear apart infantry or vehicles with equal ease.

More fearsome is the sonic pulse cannon that has been fitted to the trusty T-34 medium tank - no target is safe from its effects. The Germans may have prepared themselves over the harsh winter but they face a relentless juggernaut as the spring thaws begin.