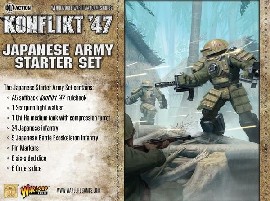 June 1947. The Imperial Japanese Army is consolidating its position after almost 16 years of war, first with China, then in a brief struggle with the Soviet Union and later against the US and British Commonwealth. With major gains on the Asian mainland and still holding territory across the Pacific, the Japanese Army is under pressure but holding firm.

New Rift-tech weaponry is appearing in greater numbers and the Allies political uncertainty plays to Japan's advantage. The fortitude and fanaticism of the Japanese soldier remains a potent force, but it's the Rift-tech Scorpion light walker that terrifies its enemies, a stealthy machine with a powerful weapon load. As Walker technology advances, the humble tank may become obsolete, but in the meantime, the Rift-tech weaponry upgrades keep the proven Type 97-Kai Shinhoto Chi-Ha in the front line, its compression cannon capable of defeating infantry and Allied tanks alike.

This Konflikt '47 starter set provides the men and machines needed to finally push the Allies out of Asia and ensure the domination for the Emperor.