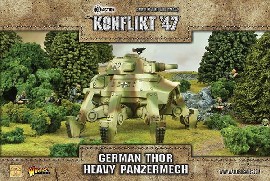 The Thor panzermech is designed to enter the toughest urban environments and deal with entrenched infantry. Well armoured and armed it does its job far too well for most opponent's liking. First fielded alongside the Zeus in April 1946, the Thor was the Rift-tech inspired, original design that was later modified to create the Zeus. Developed to provide infantry in urban combat zones a form of mobile pillbox, the lessons identified in Stalingrad, Warsaw and Brussels were clearly a large part of the Thor's design criteria.

Armored all round to protect it from flanking infantry, the Thor carries a 150mm howitzer capable of reducing any building or strong point to rubble. Its 20mm autocannon provides some protection from infantry or light vehicles, but it expects accompanying panzer grenadiers to keep it safe from the enemy at close quarters. Able to navigate the rubble-strewn streets of an urban battlefield, the Thor pushes relentlessly forward, knocking out enemy positions one after another, its lack of speed rarely an issue in the close-quarter battles for which it was designed.