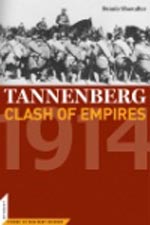 The battle of Tannenberg (August 27-30, 1914) opened World War I with a decisive German victory over Russia-indeed the Kaiser's only clear-cut victory in a non-attritional battle during four years of war. In this first paperback edition of the classic work, historian Dennis Showalter analyzes this battle's causes, effects, and implications for subsequent German military policy. The author carefully guides the reader through what actually happened on the battlefield, from its grand strategy down to the level of improvised squad actions.

Examining the battle in the context of contemporary diplomatic, political, and economic affairs, he also reviews both armies' social settings and military doctrine, and shows how the battle may be understood as a case study of problems that military organizations face in the initial stages of a major war. In addition, he demolishes many myths about the battle, such as the supposed superiority of the German military, the animosity among Russian field commanders, and the assumption that the Germans viewed their opponents as a horde of uniformed illiterates.