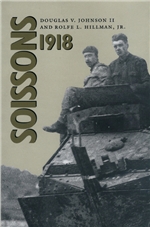 Authors Douglas V. Johnson II and Rolfe L. Hillman, Jr., provide a strategic overview of the war to the point of American involvement in combat operations. Following the long accepted Leavenworth method of analyzing operations, they thoroughly describe the enemy situation, the terrain, and the friendly situation. Subsequent chapters describe in detail each of the four days of intense combat using French, German, and American sources and American personal accounts.

The depth of the authors' coverage spans not only technical aspects of the battle but human dimensions as well. Plans matter, and so too do personalities, from sergeants and lieutenants to commanding generals. Diagrams of attack plans, maps, and photographs effectively illustrate both the intent and reality of the battle, beneath which runs a bloody narrative.